For long people had a dream why not another Mahatma Gandhi after his demise in 1948. A dream of having an iconic personality around is easier but to patronize such a dream is hard. This is much obviously proved in the figure of Anna Hazare. Anna is a Gandhi in the making but some people are against he is playing a Gandhi. He is being accused of hijacking the government. He is blackmailing a democratically elected system by an autocratic desire, those who oppose him accuse. But so did Gandhi when he launched many satyagrahs1 against the British which simulate to the same rigging ideology. That is why many times, Gandhi was restricted from visiting some places, and many seditious charges were framed against him in his own country.

Anna is alleged how he can claim he represents the civil society; so much as we can question how Gandhi represented the entire India. How people who support Anna in his mission of bringing a law in the form of the Lokpal Bill which can put a cross check to the corruption understand that Anna is on a good mission. Then how the people in the pre-independent India knew that following the path of Gandhi, they could once make the British leave the country.

However Anna has to take note that his responsibilities are bigger in the 21st century mature India when people understand politics much and political slant is too narrow. He should keep his fight apolitical. As it happened when Anna’s remarks for some good state governments were seen whether he has some hidden political agenda. We should never forget that it is a tough time when one has to fear to say some thing good about a person, an institution or a government if it is good for some reasons (though infamous for some bad ones as well). Even genuine admiration can be doubted.

He must understand that his mission is against corruption and not against corrupt people as Gandhi stressed we should hate the ‘sin and not the sinner’. Anna should keep in mind that his fight is not against a foreign rule but the very Indian system. His agitation should not tilt to shackle the system; it should target to bring in a change in the system instead. He cannot threaten the government to start anshan2 again and again.

His language should be polite even in worst situation so that his mission remains the mission of the people and does not become personal. He should show pursuance and perseverance. It is too early to say whether Anna would succeed in playing a Gandhi but it is certain there are a large number of hurdles, not agni pariksha3 though, that he has to pass. He should be very careful; else his mission can diminish easily in thin air.

A Tribute to M F Hussain

India lost one of her great painters and artists—M. F. Hussain the "Picasso of India" (Forbes). Hussain died of heart attack on June 9, 2011 in a London hospital. He was a great modernist in painting at par with European modernists such as Cézanne and Matisse etc. He was a prolific artist and applied themes in his paintings richly from the epics the Mahabharata, the Ramayana, and the Hindu mythologies.

He had to leave his native country India for some of his controversial paintings. Though we are growing educationally, we are narrowing our space of tolerance where an artist does not find his room spacious enough to juggle his brush as freely as he wants, where a writer suffocates for life. We indent to impose our own thought on others and resort to force if we feel others are not thinking as they should. Why Hussain leaved India is the example of this ideology.

A creative person has the freedom to shape his/her artistic presentation in the way he/she prefers. If a creation hurts the sentiment of a people, they too have the right to raise objection. But the objection must be a civilised objection and it cannot be a detrimental infringement on the freedom of the creative person. 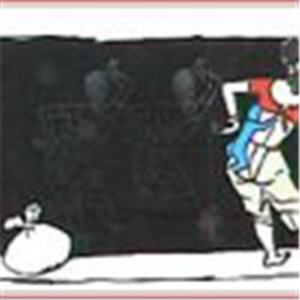 CLRI 2/2 July 2011 Issue
CLRI has become a monthly journal since June 2011. CLRI 2/2 July 2011 Issue brings some fine pieces of writings from the writers such as Zachary Kluckman (Mexico, US), Christian Ward (London, UK), and April Avalon (St. Petersburg, Russia). We request the readers to leave feedback as it helps us improve our quality and prove to be true to their expectation.

Hints:
1. agitation
2. fast onto death
3. a test in which one has to pass through fire to prove chastity