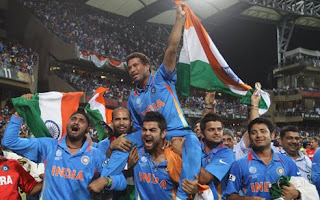 India hit the final six to bring the cricket World Cup 2011 home at the Wankhede stadium, Mumbai, on April 2, 2011. Team India is endowed with so much admiration. Suddenly we are able to see the strength Team India has. Many good things are being said about the team, the captain, the players and many other things. If, God forbids, Team India (I say Team India and not we, pun intended) had not won then we would have highlighted so many bad things ailing the Indian cricket team. Even if it had had not any, we might have exhumed many. But then victory belittles everything negative.

People across the country started celebrating as the “cricket heathen” was approaching to the victory run by run. They came out in the streets and started shouting, and playing with crackers. This went on for long till late Sunday night. This was the first time in near history when the entire country was singing a winning lore in a single voice. Vande Matram! We did not need any politician, or political party, or a social group to make a call to come out for the grand celebration. We were simply moved by the feeling that we won, that was enough.

But that is the big thing. This raises a query whether a game plays a class leveler’s role. In the case of India, of course yes. And it is cricket only.

Cricket is understood and talked about by one and all. An American travel writer, Michael Y. Park, who was on a visit to India on the eve when India lost to Australia in 2003 narrates about the story of a camel driver who hardly had any knowledge about anything happening in and around his home town Jaisalmer but did talk about cricket. Michael says: “Even when I tried to escape civilisation deep into the Great Indian Desert in the northwest, near the border with Pakistan, cricket dominated conversation. I was on a three-day camel trek, and my camel driver … played only camel polo and had never seen a professional cricket match because he’d never watched television. But … this man who had never been more than 20 miles from the fairy-tale fort of Jaisalmer and who had never heard of nuclear bombs or Uttar Pradesh, India’s most populous State, rattled off statistics about the national team and details of the players’ private lives. He even worked in a few disparaging remarks about the Pakistani team. (He) noted my astonishment. `You have to understand,’ (he) said, spitting out a gob of betel nut and saddling up his camel. `Indians are crazy about this cricket.”

When there is any match, in which particularly India is playing and if the match is reckoning, people even shun from going to office and business and are attuned to the TV sets. They react to all shots as if they are in the playground and they themselves are playing. They talk that this player should have done this and that player that…blah…blah… This shows how passionate we are about cricket. Many books have written on the craziness of cricket among the Indians.

Cricket is seen as a pitch to victory over the opponents—the real opponents. When India is playing against its opponent, every Indian wishes India wins the toss and sets such a high record that it is hard to reach by the opponent. At every four and six we exult; at every wicket fall we spell anguish. If we are chasing a record we wish the record itself must be easy and we reach it with wickets in hand. And when our opponent is Pakistan we are tense more than required. We are ready to hear nothing less than the victory. In a world cup match, at whatsoever level, if India takes on Pakistan we feel more than satisfied if we win against it. We feel victorious on defeating Pakistan even if we do not win the final match.

Cricket is a dream lived by the Indians. Upneet Grover in his debutant novel Cricket Till I Die shows how crazy we are about cricket. The protagonist in the novel dreams about cricket though he has an engineering job. He does not like the routine job but dreams about cricket. Once after being inspired by someone he follows his dream. In yet another example, such a dream was visualised by Bhuvan, the protagonist character in the movie Lagaan, played by the Bollywood actor Amir Khan to get rid of taxes from the British and he won the game with his humble team.

Cricket is very much like a religion to the Indians. Cricket is a widely popular sport in Asia. It is popular in India, Pakistan, Sri Lanka, and Bangladesh and people are too crazy in these regions. Given the population of these countries we can say more than one sixth of the entire world civilisation is crazy after cricket (excepting those countries which also play cricket). But India stands stalwart in regard of craziness and favours cricket receives. Cricket attracts the largest investment from the government; India has a very strong cricket board, that is, Board of Cricket Control in India (BCCI) whose say is respected even by the International Cricket Council (ICC). It attracts the highest endorsement from the business organisations and media than any other sports.

Given these realities, it would not be enough to say that India won the 2011 cricket world cup. India deserved it.